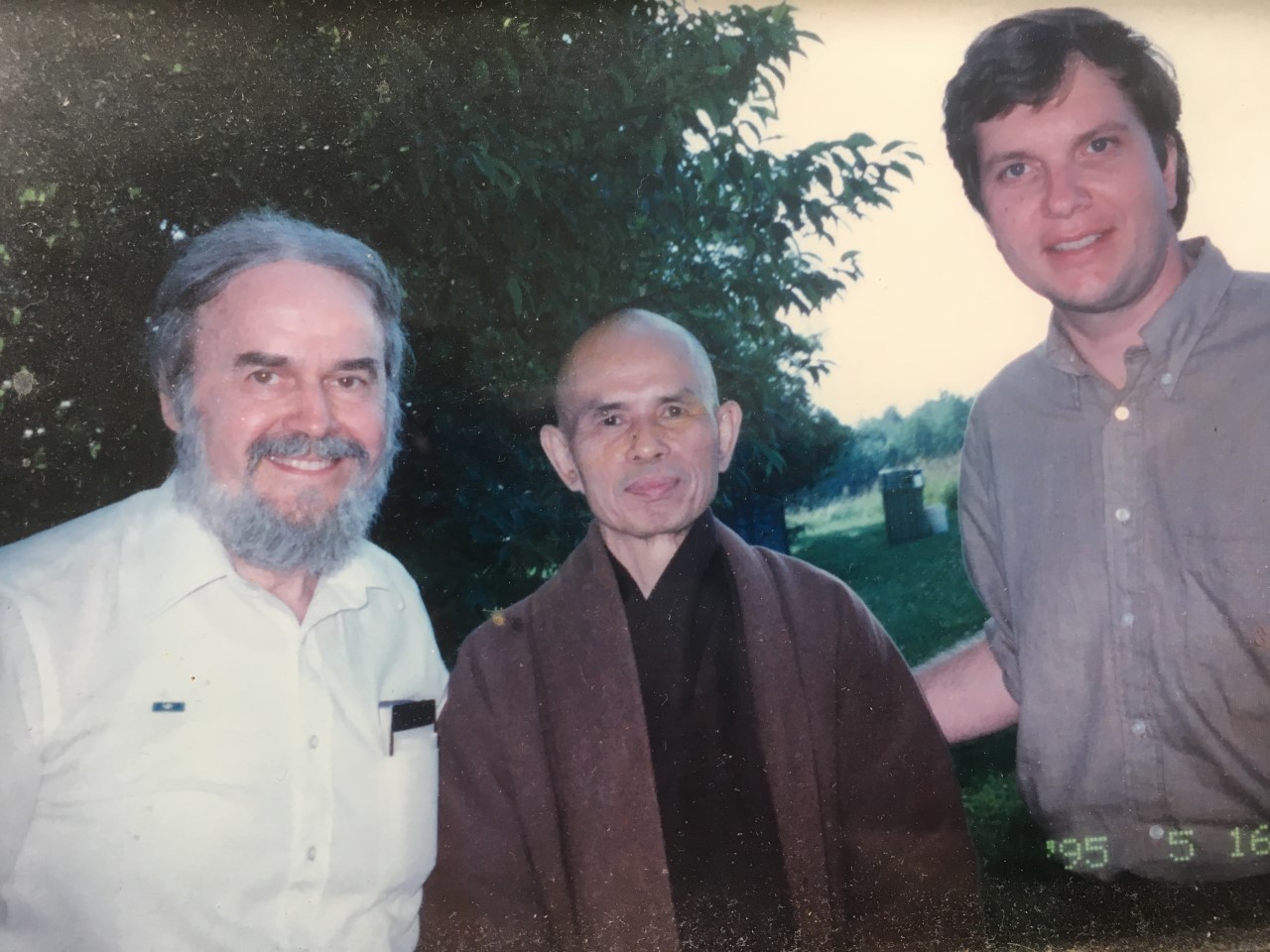 Rev. Richard Deats, a long-time global peace movement leader and one of the most influential teachers of the philosophy and practice of nonviolent action in 20th century movements, died in Nyack, N.Y. on April 7th, 2021, from complications related to pneumonia. He was 89.

“As a longtime leader of the global peace movement organization, the Fellowship of Reconciliation, and editor of Fellowship magazine, Richard Deats was one of the most well respected, well connected, and most influential peace movement leaders in the United States and the world during the last half of the twentieth century,” said Rev. John Dear, a close friend and former executive director of the Fellowship of Reconciliation.

In the early 1980s, Deats helped organize and present hundreds of workshops on nonviolence attended by tens of thousands of people throughout the Philippines which laid the ground work for the People Power nonviolence movement that brought down the Ferdinand Marcos dictatorship in 1986. He also led thirteen peace delegations to the Soviet Union in the 1980s that helped ease tensions and build relations at the height of the Cold War.

Born on February 8, 1932 in Big Spring, Texas, Deats attended McMurry College in Abilene, Texas in the early 1950s, where he became active in the Methodist Student Movement. Deats’ life changed one day in 1951 when as an undergraduate he heard the British pacifist leader Muriel Lester speak about Gandhi and nonviolence. Lester was on a global speaking tour on behalf of the International Fellowship of Reconciliation, and had been a close friend of Mahatma Gandhi, who stayed with her for three months in London during the 1931 Round Table Conference. Lester convinced Deats that Gandhi’s methodology of nonviolent change worked better than violence, and that Christianity was also rooted in nonviolence.

Deats began almost immediately to get involved with the Fellowship of Reconciliation, the US branch, and volunteered the following summer to work in a refugee camp in Germany. Deats later published an anthology of Lester’s writings, “Ambassador of Reconciliation.”

Deats enrolled at the Perkins School of Theology at Southern Methodist University and was elected student body president as well as president of the Texas Methodist Student Movement. There he became close friends with Walter Wink, who would later write a series of ground-breaking books on Christian nonviolence.

In 1956, Deats married Janice Baggett, and they moved to Boston to study for his Ph.D. in social ethics at the Boston University School of Theology, where Rev. Howard Thurman, an acclaimed theologian and preacher, was dean, and where a young Martin Luther King, Jr. had just graduated with a doctorate.

In 1958, Deats and a few other students drove South for Christmas vacation. Deats had written earlier to Dr. King saying that he and several other seminarians from B.U. planned to attend his Sunday morning worship service when they passed through Montgomery. That morning during the service, Dr. King asked the young seminarians from Boston to stand, and the congregation welcomed them with applause. After the service, they shook Dr. King’s hand, thanked him for his work with the Bus Boycott and his sermon that morning, and started to leave.

“Where are you going?” he asked. “Mrs. King is cooking a meal in your honor,” he told them. And so, Richard and his friends spent the afternoon with the Kings, talking about theology, the scriptures and nonviolence. They remained friends for the rest of their lives.

In her foreword to his book, Martin Luther King, Jr.: Spirit-Led Prophet, Coretta Scott King called Deats “one of America’s most knowledgeable and dedicated advocates of nonviolence,… an activist who has not only written about nonviolence, but has also ‘walked the walk’ in numerous nonviolent action campaigns.”[p. 10, New City Press, 2000]

In 1959, Deats accepted an assignment with the Methodist Board of Mission to serve in Manila, capitol of the Philippines, as minister to Knox Methodist Church, one of the largest English-speaking churches in Asia, where he lived and worked for the rest of the decade. He also taught at the Union Theological Seminary in Palapala, Cavite, Philippines. During those years, in protest of the growing U.S. war in Vietnam, Deats organized the Committee of Americans for Peace in Indochina, and led regular peace vigils outside the U.S. embassy in Manila.

Working with the International Fellowship of Reconciliation, he helped organize the first speaking tour of a young Vietnamese Buddhist monk, Thich Nhat Hanh, who would later become a world reknown author and teacher of Buddhist mindfulness and would be nominated for the Nobel Peace Prize by Dr. King. Thich Nhat Hanh first stayed with Deats and his family in Manila in 1965 and they remained colleagues for many decades.

In 1972, Deats accepted a position at the Fellowship of Reconciliation’s national office in Nyack, New York, where he would live and work for the rest of his life.

For the next three decades, he traveled the world and promoted peace, nonviolence and reconciliation through FOR, much as Muriel Lester did in the 1950s. He wrote countless articles, gave many speeches, led nonviolence trainings and offered workshops on active nonviolence as a methodology for grassroots movements and social change.

He gave workshops and lectures on virtually every continent, primarily in conflict zones, from apartheid South Africa to Cold War Europe; in dictator-led countries in Asia, the Pacific, and South America; in the conflict-ravaged Middle East and impoverished Haiti.

In the 1970s, Deats traveled to South Korea during the military dictatorship of Park Chung-Hee. “Though I was followed by the Korean CIA throughout most of my visit, my hosts arranged for me to do unannounced nonviolence trainings and speak to various audiences. It was on that trip that I met with the Korean Gandhi, Quaker Ham Sok Hohn,” he said.

He used his experience of holding “unannounced” workshops in Korea in many other oppressed countries for the next twenty-five years. Most significantly, he began offering workshops on nonviolence at the University of the Philippines in the early 1980s.

Stefan Merken, a close friend and leader with the Jewish Peace Fellowship, accompanied Deats on one three-week teaching tour. “Jesuit priest and peace movement leader Rev. Jose Blanco, (who had earlier been arrested and charged with plotting to oust the Marcos regime) had invited Deats to the teach at the University of the Philippines,” Merken said.  “Everywhere we went, people looked at Richard as if he was Gandhi. Crowds of people waited to see him. He was so respected.”

Deats became part of the IFOR training program that offered workshops on the methodology of nonviolence throughout the Philippines in 1985 and 1965, which paved the way to the peaceful “People Power” movement after the assassination of Benigno Aquino. Over a million people nonviolently took to the streets of Manila, forcing Marcos to flee four days later and leading to the presidential election of Cory Aquino.

In the 1980s, Deats also coordinated FOR’s efforts to promote reconciliation between the United States and USSR, and led 13 peace delegations to the USSR. “The fear in those early trips,” Deats later recalled, “changed increasingly to anticipation as grassroots diplomacy began to build an almost irresistible tide of friendship between East and West.”

During those trips, Deats led nonviolence workshops in Moscow, Tashkent and Leningrad, using Dr. King’s Six Principles of Nonviolence, which had been translated into Russian. Copies of those handouts were later tacked up on the walls of the streets of Moscow, by the Russian peace organization “Golubka,” in the days leading to the end of the Soviet Union.

In the early 1990s, he helped coordinate an interfaith peace effort in Iraq in the face of U.S.-led invasion, and met with Yasser Arafat and the PLO in Tunis to promote peace and reconciliation. He also traveled to Burma where he met with liberation groups and promoted nonviolence, as well as with indigenous leaders in Ecuador. Over the years, he spoke on nonviolence and led other peace delegations in India, Bangladesh, Iran, Japan, Thailand, Haiti, Kenya, Lithuania, Columbia, Palestine and Israel.

In the 1980s, Deats was appointed the FOR interfaith leader, so he began to reach out and promote Kingian nonviolence with religious leaders across the spectrum. “In my work with Jews, Buddhists, Hindus, Muslims, Bahai, Jains, indigenous peoples, and many Christian denominations,” Deats later recalled, “I have been greatly enriched by their various traditions of compassion, love, and devotion.”

In the 1990s, he became editor of FOR’s magazine, Fellowship, and published a series of books. Besides those on Muriel Lester and Dr. King, he wrote biographies of Mahatma Gandhi and Hildegard Goss-Mayr, the Austrian peace movement leader, as well as his collection, Stories of Courage, Hope, and Compassion and his book of jokes, How to Keep Laughing – Even Though You’ve Considered All the Facts. “There are many times when if we didn’t laugh, we would be crying,” Archbishop Tutu wrote of that book. “Thank goodness for Richard Deats.”

Deats’ essay, “The Global Spread of Active Nonviolence,” was published in journals around the world, and was one of the first to demonstrate the global power of engaged nonviolence as a methodology of social transformation that works more effectively than violent protest or violent rebellion.

“What if in 1980 someone had predicted that unarmed Filipinos would overthrow the Marcos dictatorship in a four-day uprising?” he concluded in the essay. “That military regimes across Latin America would be toppled by the relentless persistence of their unarmed opponents? That apartheid would end peacefully and that in a massive and peaceful plebiscite all races of South Africa would elect Nelson Mandela to the presidency? That the Berlin Wall would be nonviolently brought down? Such a person would probably have been thought ridiculously naïve and dismissed out of hand. And yet those things happened!” [from ‘Peace is the Way,” Orbis Books, 2000]

“More and more, active nonviolence is taking center stage in the struggle for liberation among oppressed peoples across the world,” Deats concluded. “The influence of Gandhi and King continues to grow as nonviolent movements spread around the world.

“If a global democratic civilization is to come into being and endure, our challenge is to continue developing nonviolent alternatives to war and all forms of oppression,” he added. “We must continue to challenge the age-old assumption about the necessity of violence in overcoming injustice, resisting oppression, and establishing social well-being.”

May we carry on his example of steadfast nonviolence and try to be teachers and apostles of nonviolence like Richard!

The Beginning of the End of Nuclear Weapons