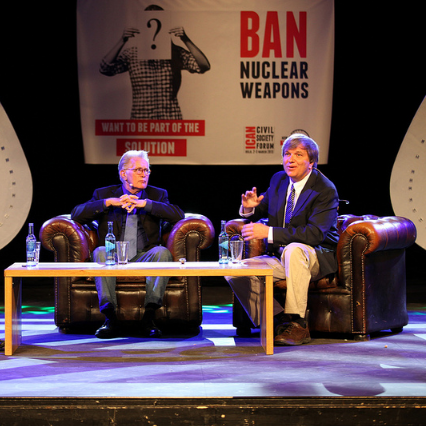 Today is the day the United Nation’s Treaty on Nuclear Weapons goes into effect. It is the long planned but seemingly impossible day millions—billions—of people have waited for since Hiroshima day, August 6, 1945.

Today, the UN treaty declares that the manufacture, possession, use or threat to use nuclear weapons is totally illegal under international law, seventy-five years after their development and first use. Actions, events, vigils, and celebrations will be held around the nation and the globe to mark this historic moment.

Even though I’ve spent most of my life working for the abolition of nuclear weapons, I never thought I’d live to see this day. The most striking test of faith came in none other than Oslo, Norway, where my friend actor Martin Sheen and I were invited to be the keynote speakers at the launch of something called “The International Campaign to Abolish Nuclear Weapons,” (www.icanw.org) which went on to the win the Nobel Peace Prize.

I have been arrested dozens of times for nonviolent civil disobedience actions against nuclear weapons, including at the White House, the Pentagon, several Trident submarine bases, the SAC command base near Omaha, Nebraska, the Nevada Test Site and Livermore Labs. Since 2003, I have led the annual Hiroshima Day peace vigil outside the national nuclear weapons labs in Los Alamos, New Mexico. I had been planning with friends a major anti-nuclear vigil, rally, and conference near Los Alamos, New Mexico to mark the 75th anniversary of Hiroshima, but instead, we held a powerful virtual online conference seen by thousands that featured Dr. Ira Helfand, co-founder of the Nobel Prize-winning Physicians for Social responsibility and one of the leaders of ICAN.

On December 7, 1993, with Philip Berrigan and two friends, I walked on to the Seymour Johnson Air Force Base in Goldsboro, North Carolina, right through the middle of national war games, up to one of the nuclear-capable F15 fighter bombers and hammered on it, to fulfill Isaiah’s prophecy that someday people would “beat swords into plowshares and study war no more.” For that act, I faced twenty years in prison, was convicted on several felony counts, spent nine months in a tiny cell, several years under house arrest, and continued to be heavily monitored by the government. My friends, Dan, and Phil Berrigan, who launched the Plowshares movement dreamed of this day. Other friends sit in prisons across the nation today for their recent actions.

But this was something else. This was a first for me. We had been brought to Oslo by the Norwegian government. We stood before some 900 people that Saturday night, March 1, 2013, at the civic forum which proceeded the global gathering of representatives from over 132 nations. (Of course, the U.S. refused to attend.) The formal meeting would start Monday morning. As far as we could tell, there had never been such a conference before in history.

Martin began his talk by thanking ICAN for their work to build a global abolition movement and encouraged everyone to keep at it. He read aloud their general call:

–that any use of nuclear weapons would cause catastrophic humanitarian and environmental harm;

–that there is a universal humanitarian imperative to ban nuclear weapons, even for states that do not possess them;

—that the nuclear-armed states have an obligation to eliminate their nuclear weapons completely;

and that we need to take immediate action to support a multilateral process of negotiations for a treaty banning nuclear weapons.”

For the next 48 hours we spoke non-stop, in workshops, to the press, to small groups and large groups. We were given a private tour of the Nobel Peace Prize museum, attended a reception with the Norwegian Parliament and met many members and politicians whom we urged to carry on their initiative for the abolition of nuclear weapons, including Norway’s foreign minister, the Vice President of Parliament, and the Mayor of Oslo.

It was there at that reception that we met Dr. Ira Helfand, who told us that for the first time in four decades he felt hopeful about nuclear disarmament. There has never been such an important gathering in history, he said with a smile.

At one point during the ICAN conference, a teenage student took me aside and tasked to speak privately with me. He confided that he was one of the survivors of the massacre a year and a half before, when an insane shooter killed 78 children during their summer camp on an island in a large lake not far from Oslo. My new friend told me how he dodged the bullets and swam far out into the lake and barely survived. He wanted to talk with me about nonviolence and forgiveness. I encouraged him on his journey of healing toward a deeper peace but was profoundly moved by his connection between the summer camp massacre and the global massacre that can be unleashed through nuclear weapons. He saw now what most people refuse to see. And he was determined to do his part to prevent a global massacre of children.

All these experiences were so touching and inspiring, but there was something even more powerful afoot. From the moment we landed in Oslo, as we met various dignitaries and longtime anti-nuclear leaders from around the globe, we heard the same statement over and over again: we are going to abolish nuclear weapons.

After a while, Martin and I looked at one another and thought to ourselves: something’s not right with these people. Sure, we do what we can, of course, but we’re not going to live to see the abolition of nuclear weapons. Our new friends were drinking the cool aid.

All we have to do is get fifty nations to sign a UN treaty banning nuclear weapons, they said; then we can slowly chip away at every other nation in the world, until all that are left of the nine nuclear weapons nations who will eventually be shamed into dismantling their weapons and signing the United Nations’ Treaty. It was a no-brainer.

Well, good luck with that, we said.

And here we are. Today, the treaty goes into effect. Today is the beginning of the end of nuclear weapons.

For my friends and I, this is a day we never quite believed we would see.

“Right now, the Treaty does not legally apply to the United States,” says my friend Ken Mayers of Veterans for Peace New Mexico, “because we have not signed or ratified it. But that does not mean we will not be feeling the moral force of the Treaty. All nuclear weapons, including the thousands in the US stockpile, have been declared unlawful by the international community.”

Ken and others will keep vigil today near the Labs in Los Alamos, NM, calling for an end to weapons development. Similar vigils will be held across the US today with banners hung outside nuclear weapons production sites declaring “Nuclear Weapons Are Illegal!”

“The Treaty is a turning point,” says my friend Joni Arends, of Concerned Citizens for Nuclear Safety. “On the one hand, it is the end of a long process to outlaw nuclear weapons. On the other hand, it is just the beginning of a new movement to confront nuclear weapons states and demand they lift the dark shadow of nuclear annihilation that has loomed over the world for the last seventy-five years.”

“The U.S. was among the last major countries to abolish slavery but did so in the end,” says my friend Jay Coghlan of Nuclear Watch New Mexico. “To modify Dr. King’s famous quote: ‘The arc of the moral universe is long, but it bends towards [the] justice’ of abolishing nuclear weapons. This ban treaty is the beginning of that end and should be celebrated as such.”

Every time we have journeyed up to Los Alamos over the years, we offered the same, simple message: Nuclear weapons have totally failed us. They don’t make us safer; they can’t protect us; they don’t provide jobs; they don’t make us more secure; they’re sinful, immoral, and inhuman. They bankrupt us, economically and spiritually.

According to the Doomsday Clock, we are in greater danger now than ever. A limited nuclear war between India and Pakistan is very possible; an all-out nuclear war would end life as we know it. If we spent billions instead on teaching and building nonviolent civilian based defense systems and nonviolent conflict resolution programs around the world, to be orchestrated by the United Nations, we could make war itself obsolete.

The work of ICAN and the United Nations to get fifty nations to outlaw nuclear weapons and build a process toward their elimination is one of the most exciting, hopeful, if widely ignored, movements in the world today.

Just before Christmas, Dr. Helfand called me. He continues to work morning to night in a Massachusetts clinic treating COVID patients, but he wanted to talk about the treaty. How can we push Americans to demand that the United States sign the treaty and dismantle our arsenal, he asked me? How can we mobilize the movement to make President Biden and the U.S. Congress do the right thing?

That’s the question. We talked about various efforts we could make and agreed to do what we could. The responsibility lies with us, he said. We were the first to use nuclear weapons; we must be the ones to end them once and for all.

A few days later, he sent me an email with the gist of our message. “Along with climate change, the nearly 14,000 nuclear weapons in the world pose an existential threat to humanity. And the danger of nuclear war has never been greater. Tensions between the US and Russia, the US and China, India and Pakistan are great and growing. Even a limited nuclear war involving less than 1% of the world’s nuclear arsenal could kill 100 million people in an afternoon and cause enough climate disruption to bring about a global famine that would put billions of people at risk and destroy modern civilization. A large-scale war would kill hundreds of millions outright and cause a nuclear winter that would kill the vast majority of humankind.

“This is not the future that must be,” Dr. Helfand wrote me. “Nuclear weapons are not a force of nature. They are little machines that we have built with our own hands and we know how to take them apart. Nations around the world have come together in the Treaty on the Prohibition of Nuclear Weapons. It is time from us to move back from the brink and eliminate nuclear weapons before they eliminate us.”

And so, the day has come when that long dreamed of future has become a real possibility. Our task is to make the possible probable, and then actual. Time to get back to work. Call President Biden and Congress, write letters to the editor, mobilize the movement, tell the nation let’s abolish nuclear weapons now, once, and forever, and use those massive funds to vaccinate everyone, rebuild our nation, protect the environment, abolish war and poverty, and welcome a new culture of peace and nonviolence.

As I learned in Oslo, anything is possible if you believe.

John Dear has spent over three decades speaking to people around the world about the Gospel of Jesus, the way of nonviolence and the call to make peace.